Last week, Gaby walks with Rhinos had some guest walkers, and now another guest blogger!

I’m Dennis and Louise and I have been on holidays on the UK for a few weeks and using the opportunity to meet up with our good mates Gaby and John as they do the final push in Gaby’s walk around Germany to raise awareness for the plight of the Rhino.   Over the last few thousand years most of the species of Rhinos that are known to have existed have now gone extinct, leaving only 4 species left, and of them only a few thousand are left.   All so that the horns of these magnificent animals can be ground up for medicines that can’t possibly have any affect on the user.

So we met up with Gaby and John near Hamburg, and started our walking experience at a little town called Dannenberg, where Gaby left off her walking in August.   We started off well and at the first opportunity took a wrong turn.   Even with the GPS telling us we were going the wrong way we persisted until we met a local who gave us the drum – we were going the wrong way.   So we turned around and headed off towards Hitzacker. 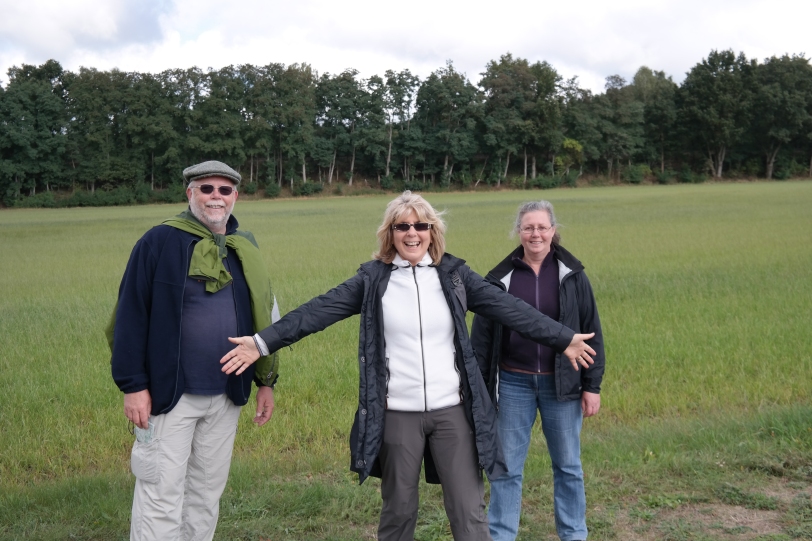 The country side was beautiful, with old thatched farmhouses and green fields of crops.   The weather was a bit overcast, but cool, so the walking was good.   What, I had to ask, were the yellow painted crosses about?  They were in almost every yard, on all the houses, everywhere.   Were they some local superstition to ward off the evil eye, a warning to travellers to pass on quickly less you get tied up to one and have tomatoes and root vege thrown at you…   No turns out it is a protest against a nuclear waste dump planned for the area.   Good cause – fair enough. 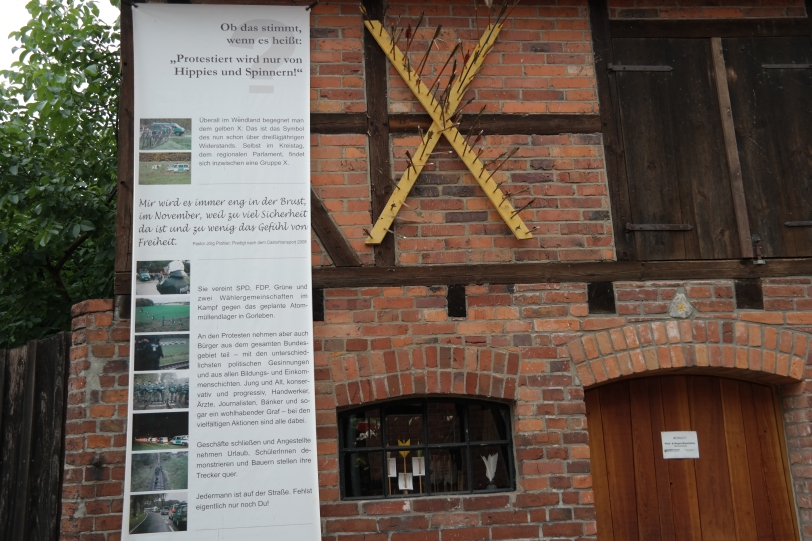 As we approached Hitzacker, the road signs continued to tell us that it was 2 kilometres away.   W had arranged to meet John in the backup vehicle at a pub in the old city of Hitzacker which sits on an island in a tributary of the Elbe, and which reliably floods every year or two.   All of the pictures on the walls of the pub are of recent floods.

Well, that was about all the walking for us, 10 kilometres is enough when you are not used to it.   Gaby pressed on for another 7 Klicks in the afternoon then we went to Lueneberg for dinner and ouzo.

What a lovely day.

NB: from Gaby – What a pleasure and privilege to have such good friends come and support my journey and walk with me. Despite living in different states in Australia, they have commited to my cause and were at the launch in Adelaide back in Febuary and now in Hamburg in October. Thank you guys for your love and support. Remember the plans we discussed and “chilli ouzo” in the little cottage with low hanging cupboards (ouch!).